Sorry, sorry. I had a whole plan for getting my act together. A proper schedule of updates and features. Not just blogging, either. Proper working hours for my writing and editing work. More exercise and better right. A full, psychotically optimistic and unlikely life transformation.

After about a fortnight of that my body obviously realised I wasn’t pissing about and decided that the only way to get back to spending 10 hours a day in bed would be to make me sick. Properly, debilitatingly sick.

Anyway I think I’m better now. I took some giant pills my doctor gave me and they seem to have done the trick. Hopefully I can get back on schedule next week.

But May wasn’t all weeping and sicking up minor organs into the bin! I also found some time to squint my way through a few mysteries. Here’s what managed to penetrate my drug-induced haze.

The Mystery of a Butcher’s Shop (Gladys Mitchell, 1930) 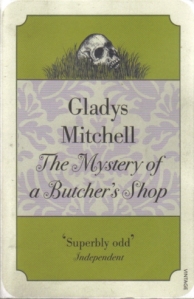 I enjoyed this a lot, but it’s almost an anti-mystery. It makes basically no sense, relies on enough coincidences to make Sophocles blush and has an ending that’s a deliberate anticlimax. But I’ve read Mitchell before, so I knew to enjoy the wonderful writing and dialogue and not really pay attention to the plot. Mrs Bradley is on good form, being rude to everyone and perverting the course of justice as usual. There are some really well-drawn minor characters as well, but maybe a few more than necessary. Some pretty important ones (important to the plot, I mean) got rather swept under the carpet for the middle sections.

I’ve got a whole set of these, so I’ll probably do a proper post when I’ve read some more. Mrs Bradley really is a fantastic character, and this was genuinely amusing throughout.

…unlike this load of old arse scrapings. Detective Robert Hunter must investigate when some meanie or other blows up the Los Angeles County Department of Coroner (weirdly, that’s not a typo) by sneaking in a bomb. A bomb sewn up in the vagina of a corpse.

Which is grim. And stupid. It’s also handled so witlessly that it’s actually rather hilarious, completely ruining the intended atmosphere of creeping suspense.

Chris Carter is apparently a trained criminal psychologist. I believe him, but it would have been nice if he’d actually put some of his expertise in the damn book.

I bought this because I was worried I was being too snobbish and narrow in my crime fiction choices. I still think that’s true, but maybe I was wrong to cast the net so wide. This really is fiction with no other aim than puerile shock tactics. If I’d paid more attention when I was browsing through the supermarket crime section I’d have noticed that the blurb says the victim’s body “bares no marks” and put it straight back. How can you let a mistake like that onto the back of a book?

Anyway, it’s not just sloppy editing. No-one’s interested in telling a competent story here. I wouldn’t be surprised to find that this was rushed out in about six weeks.

Another corpse turns up in Oxford, this time a Lewis Carroll obsessive who’s been buried near the botanical gardens. Morse creator and series consultant Colin Dexter has been on record as saying that Lewis is often “too complicated”, but he’s wrong. It’s not too complicated, it’s too cluttered. There are three or four red-herring plot strands here that are included just to be Oxford-y and the result is that the good stuff, the stuff the story is actually about, gets rushed. The Lewis Carroll part is especially arbitrary. It goes nowhere and means nothing, and is clearly included because the writers feel that there’s a mandatory quotation allowance that has to be met or an episode won’t seem sufficiently intellectual.

That makes it sound like a stinker, but I enjoyed the streamlined second half, and in the end it was quite a moving tale of various kinds of doomed and corrosive love. If only they’d given themselves more than ten minutes to tell it… 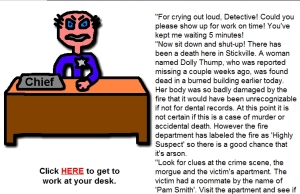 These seem to be fondly-remembered point-and-clickers from a number of years ago, but I ran into them for the first time last week. They’ve got an endearingly amateurish MS Paint style but a surprisingly grim set of scenarios, touching on arson, drugs, prostitution and domestic violence. Puzzles typically involve searching the town for clues, following up on leads and then presenting a case to the police chief. In the later games there’ll be a final chase and shoot-out with the culprit. It’s an unusual setup, not least because you actually DO have to investigate – the game doesn’t record any information for you and you have to select from a huge amount of possible evidence at the end when you present your case to the chief. Unfortunately the writing is really poor, often consisting of huge, daunting looking infodumps like the one in the picture. Still, it was an entertaining enough way to spend 15 minutes, and it’s always refreshing to not be led through a mystery game by the nose.

I probably didn’t give this enough of a chance, but it really didn’t grab me. I’m terrible at cover-based shooters, so I had difficulty even on the easiest level. I’m good at computer games (heck, I made most of my money last year beating housewives at Bejeweled!), so I ought to have the necessary dexterity and reflexes to breeze through something like this, but for some reason when it comes to these modern FPSs I’m all thumbs. Maybe I’d have more luck with the PC version.

If the story had been more compelling I might have persevered, but they took an interesting setup – a near-future world where the rich are able to cybernetically alter their bodies, blurring the lines between human and machine – and castrated it with artificial, tick-box writing. You can practically see the coloured sidebars from the screenplay writing books as you listen to it. I realise that in films your minor characters all have a limited amount of screen-time and that necessitates a sort of “plot-point shorthand”. But AAA games last ten hours or more: there’s no need for every single character to pithily allude to their troubled backstory and barefacedly outline their function in the plot within thirty seconds of being introduced. It feels manipulative and it ruins any hope of immersion.

After the fun I had with Legend of the Crystal Skull, I thought I give a few of the other Nancy Drew games a try. This one was pretty disappointing, to be honest. Here Nancy has to go undercover at an exclusive girls’ school to discover who has been threatening the valedictorians. The characters were well written and believable, but they were all annoying in a “US TV show set in high-school” way (that was almost certainly intentional, but the fact that characters are authentically annoying can’t excuse the fact that they’re really bloody annoying). The relative tameness of the plot didn’t help to stoke my interest, and most of the time it felt like I was running errands rather than investigating. Also the mystery, while fair, hinged on a single clue that you won’t find until almost the very end of the game.

There were some good (and tough!) puzzles, but also a lot of tedious minigames with flaky controls and some solutions which seemed pretty arbitrary. It’s Poe themed, and if you take too long on the final puzzle Nancy will get killed by a deadly pendulum! So props for that. The Nancy of the computer games is a pretty good character, but she’s so peppy in the face of setbacks that I defy anyone to play a whole game without once hoping she’ll get sliced in two!

One of the earliest ones, and unfortunately the newer games have since implemented so many handy features that playing this was too awkward. Trying to ride the horses was a chore, and there was no sign of Nancy getting skewered by a cactus any time soon. I gave up pretty quickly.

This is an über-high-budget adventure game hybrid, set in a sumptuously recreated 50s Los Angeles. It has some of the same writing problems as Deus Ex, but the markedly superior penmanship and added subtlety makes these problems much easier to ignore. After an hour or so I was pretty immersed in the story. It still smacks of by-the-numbers screenplay writing, but the writers have either attended a lot more weekend workshops, or they’ve been shelling out for a higher class of how-to guide. Unfortunately the designers/director can’t seem to decide what sort of game they’re trying to make or what sort of story they want to tell with the mechanics. It’s presented like a puzzle mystery, but structured like a noir. The upshot is that it fails badly at both, which is a real shame because there’s some really excellent stuff here and I think either format could have been successful, if only they’d had the sense to choose one and stick with it.

But there seem to be a lot of chapters, each of which covers a new rung on the main character’s rise up the career ladder. Maybe things will settle down into a better rhythm once I get my inevitable promotion to Homicide. I’m going to take a break from it, but I’ll probably play to the end. It’s almost certainly worth a post of its own.

Oh, and if the driving portions are anything like actual driving, pedestrians everywhere should be incredibly grateful that I never bothered to learn!

No. Just… No. A cynical moneygrab of a game, slung together in about twenty minutes, this doesn’t even manage to be laughably bad. The only excuse would be if Betty Driver had actually designed it herself, god rest her!

One thought on “May Roundup”