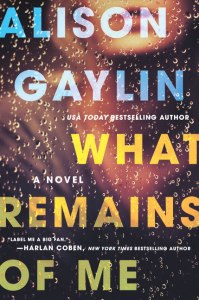 Capsule Review: What seems like a standard “Hollywood murder in the past” setup actually has an unusual and interesting kaleidoscopic solution, but the over-the-top ‘80s LA flashbacks and the unwieldy number of POV characters in the modern sections make What Remains of Me hard to recommend.

Longer Take: In 1980, 17-year-old Kelly Lund was sent to prison for 25 years for shooting film director John McFadden. Everyone knows she did it, but no-one knows why. For her part, Kelly doesn’t deny it. In fact, she doesn’t say much of anything. Now, five years after being released, she just wants to hide from the world and try and build what semblance of a life she can. But now McFadden’s friend, the actor Sterling Marshall, has been shot in exactly the same way, and Kelly was seen leaving his house in the middle of the night.

The action shifts between 1980 and 2010. We see teenage Kelly falling in with the LA film set, against her mother’s paranoid wishes, and the buildup to the first murder. This is interspersed with the investigation in the modern day, from the perspective of a frankly ridiculous number of characters (Kelly, her husband, her mother, an investigative journalist, TWO different policemen).

This structure sets up a good number of mysteries. Did Kelly kill Marshall in 2010? Did she actually kill McFadden in 1980? Why did her twin sister commit suicide? Why did Marshall pay Kelly to terminate her pregnancy? What happened to Kelly’s stuntman father which forced him to retire? Why does Kelly’s mother keep a box of stale Valentine’s candy in her bedroom? What happened to Kelly’s first boyfriend, McFadden’s son, who hasn’t been seen since the murder? All these and more are juggled well, with an overall solution which, while not particularly surprising, is incredibly neat in the way it realigns almost all the major characters’ motives.

Unfortunately, I didn’t believe a word of it.

The LA setting has the same problem that plagues most of these stories: there’s such a huge number of “Wow, 1980! Remember all this stuff we had?” cues that it becomes parody.

It’s not convincing, but at least it’s comparatively tight. We stay in Kelly’s POV, and she’s rendered consistently, with shades of her character being informed by what we learn from the 2010 chapters.

But those 2010 chapters are a mess. The police investigation isn’t convincing or interesting. We’re given two different police POV characters, but neither of them undergo any kind of character arc, so it’s not clear why we’re forced to spend any time with them except Gaylin couldn’t work out a better way to portray certain events.

And Kelly’s early sections require some complicated linguistic backflips to avoid addressing whether or not she’s guilty, and Gaylin is unable to juggle that with making the character sympathetic or interesting.

This feels like the epitome of a good first draft. There’s actually a very effective mystery here,  but it needed an aggressive editor who was willing to put the time in to tighten everything up. We smash cut from 2010 to 1985 and back with no particular rhyme or reason. In addition to the multiple POV characters being added and dropped on a whim, the book is haphazardly peppered with fake news articles, book excerpts and other nods towards verisimilitude. Some of these are good, but many are unconvincing pace killers (the TMZ articles seem particularly toothless compared to the real thing).

You need to be brilliant to justify the kind of free-form structure Gaylin’s adopted. And while Gaylin is a good enough writer, I guess, like a lot of modern crime writing it’s all very flat and humourless. Plenty of stories need to be told from multiple perspectives, but a clear structure is your friend. More on that next time.

Final Verdict: I didn’t care about any of the characters in What Remains of Me. I didn’t even believe in them as people. They were all presented in the same glassy, detached way I see in a lot of modern crime writing.

And Gaylin wasn’t able to make up for this in other areas. I didn’t really feel like I learned anything about 1980s LA, film-making, or modern homicide detection. There’s a kind of theme about how we treat fame (and infamy), but it’s not really developed. None of the writing stood out on its own merits.

I kept reading solely to find out what happened, and I wasn’t disappointed, but a full-length novel should have more than that going for it.

Alternative Recommendation: If you want interesting mysteries mixed with the struggles of rich/poor California teens, just watch the first season of Veronica Mars, one of the few perfect seasons of long-form US television. Seriously, there’s not a bad episode in there.

Disclosure: I received a free advanced review copy of What Remains of Me from NetGalley