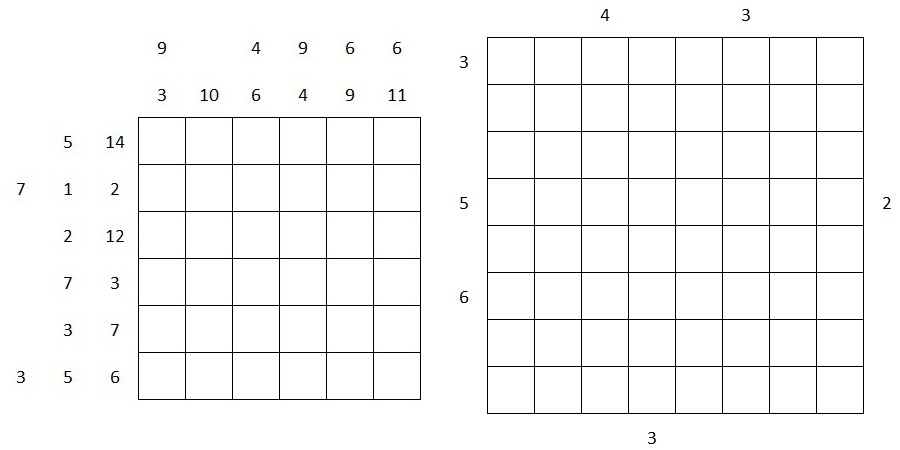 I’m feeling a bit listless today, so how about a puzzle break? My gut feeling is that the Venn diagram of mystery lovers and puzzle lovers has a huge overlap. The Puzzle Doctor has finally capitulated to nagging on multiple fronts and begun to post about his experience at the World Puzzle Championships. I once applied to enter, many moons ago, but never got further than the application stage (and I may even have been very naughty and lied about my age, so it’s probably best I didn’t get through…)

I’m mostly interested to learn what the actual experience of the competition is like, but in the meantime the Doc has put up two puzzles of the kind you’d see at the championships, although these are his own creation. The first is Japanese Sums, the second is Tetrominoes. Do please check out the original post (and the rest of his great blog – spoiler-free reviews of a wide variety of mysteries and thrillers).These are new formats for me, although the rules are similar to several other Japanese-style puzzles. I think the success of a format depends on how many different tricks and themes they can have. I find Sudoku quite boring in that regard, because there only seem to be a handful of ways to approach them (at least in the vanilla format). On the other hand, the rules for Nurikabe produce dozens of different kinds of sub-puzzles and themes, sometimes within a single puzzle. Unfortunately they tend to be irregularly shaped, which isn’t great for newspapers.

Anyway let’s see if we can puzzle these out. 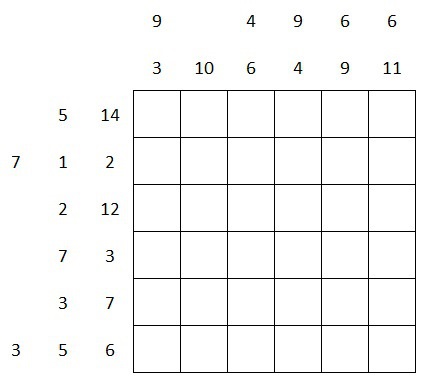 Japanese Sums – in the grid, either shade the cells or place a digit from 1 to 6. The digits cannot repeat in a row or column, but all digits do not need to appear in each row or column. The clues for each row and column represent the sum of each string of digits (or single digit) in that row/column, which must be separated by at least one shaded cell.

So where to begin here? The numbers 1 to 6 add up to 21, so that’s our upper limit. But there are no 21s in the clues, so every row and column must have at least one space. But very big and very small numbers are usually a good place to start. So let’s have a look. The first row’s clues add up to 19, so that must include every number except the 2. Can we put anything in already? No, because that 5 clue could be a lone 5 or a 1/4 string (in either order). But it does mean the empty space is in either the second or third column.

So what next? Adding up the clues gives us 77, but that doesn’t seem very useful. There are some other big clue totals, but nothing as big as the 19. I may be stumped already!

Oh I’m being dense. That 1 in the second row can only be a 1. And the same for any 2s – 1/1 isn’t an option because numbers can’t repeat. That’s the sort of thing I mean by rules you pick up as you do these puzzles. With that worked out, there’s no need to go through that chain of reasoning again. Next time I’d immediately begin looking out for the 1s and 2s.

I hope this isn’t a super easy one! I seem to be making a meal of it.

Oh wait. I’m being thick again. We already deduced the space in row one is in the second or third column. So there CAN’T be a space in column five. So that has to be a 6. 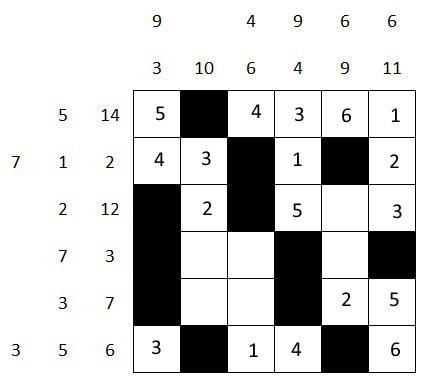 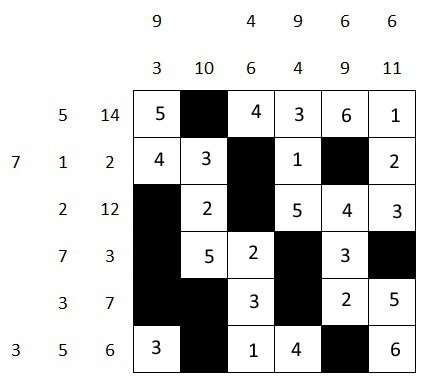 With the ease that filled in once things got going, I suspect that probably was an easy one after all. I’d certainly try another one now I’ve got the hang of it a bit, but I wonder if the general pattern is going to be staring at an almost blank grid until you find a way in and then the rest of the puzzle is very simple in comparison. That is one thing I find off-putting about some of these Japanese puzzle formats. I quite like to make constant progress, and for the end to involve as little mopping us as possible.

Puzzle Doc’s second puzzle might be an example of this. I can’t really see where to begin.

So the 7 tetrominoes collectively take up 28 spaces, but I’m not sure that gets us anywhere. With Battleships, another placement puzzle, you often begin by working out where to put the longest ship, but here all the pieces take up four spaces. But the 4 x 1 tetromino is the least flexible, so maybe that’s where to start? Hmm. This is going to be very awkward to describe. I seem to remember the tetrominoes are named after letters? Ah yes, here we go: I, O, T, J, L, S & Z. So the 4 x 1 is the I.

The I can’t go into any of the rows or columns clued with a 3. And it can only go into the row with the 5 on the left…

Oh wow. This is what happens when I turn my editor’s brain off. I completely misread the instructions. The numbers are for blank spaces, not for number of filled spaces like in Battleships. Okay, so let’s put in those spaces now.

And because of the wording, it means the first space AFTER the clued number of spaces must be filled, although we can’t tell with which shape yet.

So maybe this won’t be too difficult after all. The grid has already been divided into some pretty discrete regions.

Tetrominoes can’t touch diagonally, so we can put in some more spaces. Those two filled spaces in row 5 can’t extend right to meet the space in row 4, because that would make a pentomino (and also diagonally touch the filled space in row 6). So there’s a space to the right of them, and the only way to make a tetromino is if it’s the I.

Now the only way for that filled space in row 4 to go is if it meets the one in row 6. That makes it the S. We can also fill in lots more blanks, including the ones diagonally above the S. 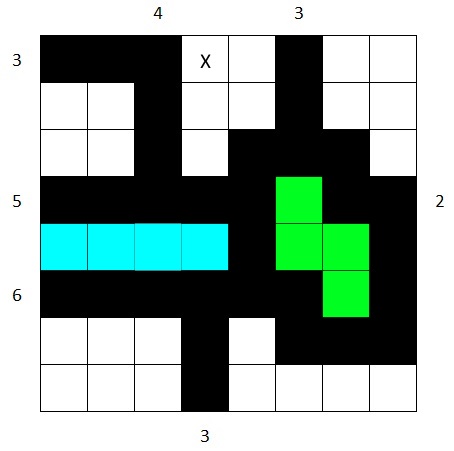 That space in the top left either has to be the O or it’s empty. But with only two tetrominoes in place and five empty regions left there isn’t space to waste one of them. So that’s the O. 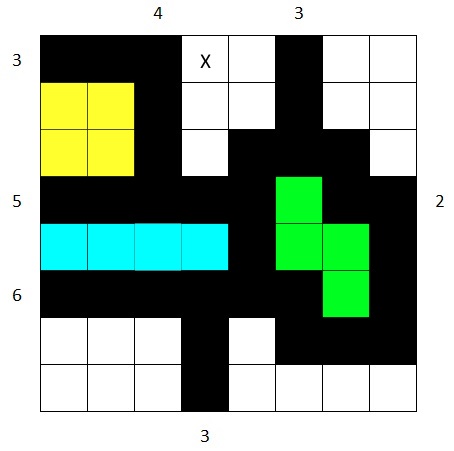 Now it seems to just be a matter of fitting in the remaining pieces: the T, the Z, the J and the L. There’s space in the bottom left for any of them, so I guess that’s last (or is it? After thinking about it and making a bit of a tit of myself on Puzzle Doc’s blog, that clearly has to be the Z, because if there was any other piece in there the solution wouldn’t be unique. I have a vague memory you aren’t supposed to skip ahead like that though, and the solution should be unique without relying on its uniqueness to get there. So let’s pretend we haven’t worked that out and be surprised when it’s the Z.)

Anyway, it’s not too tricky. In the bottom right it can only be the J or the I, but we’ve already placed the I. The zone in the middle at the top can only fit the T, J or Z, but we’ve used the J and the Z wouldn’t include the compulsory space at the very top left. So that’s the T.

Which leaves the Z and the L. But only the L will fit in the top right. Which means the Z goes in the bottom left as I said (and due to the rotational symmetry of the Z/S pieces, there’s only one way to place it).

Nice and logical. It only seemed daunting because I completely ignored what the rules said! I wonder how much harder the puzzles in the competition were. Obviously these were pretty simple introductions to the formats, but how much harder could the tetrominoes one get without upping things to pentominoes or higher?

Anyway, thanks again to the Doc for the fun. I look forward to hearing about the competition itself.