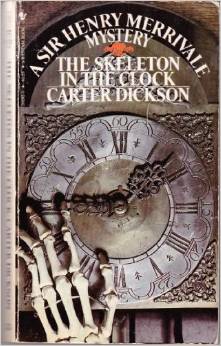 If you haven’t read one of these before, I write up my thoughts on a mystery as I go along, and try and solve it before the end. To avoid devastating people with spoilers, I try to pick books that are very obscure or have had poor reviews. This time, it’s Carter Dickson’s The Skeleton in the Clock.

Carter Dickson was the alias of John Dickson Carr, the Golden Age’s master of the locked room mystery. He had two major detectives, Doctor Gideon Fell and Sir Henry Merrivale, and he published each series under a different name. This is one of the few H.M. mysteries I haven’t read, and it’s had pretty mixed reviews. But that’s hardly surprising; John Dickson Carr is one of those authors that you read in the hope that this time he’ll be back to his old form. There’s a handful of masterpieces and then a real swamp of rubbish. I’ve not got very high hopes here, but actually I’ve found that John Dickson Carr books are much more enjoyable now that I head into them with my expectations at rock bottom.

It’s a Henry Merrivale mystery, so gird your loins for impossible murder, juvenile humour and maybe some nauseating sexism. (As usual, I’ll be taking bets on how long it takes Carr to use the word “wench”. My edition’s 300 pages, so I reckon he’ll drop the w-bomb by at least page 50.)

Are you ready? Let’s go!

Chapter 1: “If what you say is true, what would be the most dangerously haunted place on earth?”

Martin Drake, Ruth Callice and John Stannard are discussing the supernatural. Stannard declares that a prison’s execution shed would be the best place to meet ghosts, on account of all the angry criminals who must be hanging around. Luckily he’s a K.C., so he can get access to just such a shed at the defunct Pentecost prison. The others agree that this would be a brilliant idea, because this is a John Dickson Carr mystery and that’s what happens in Chapter 1.

By purest coincidence, Pentecost is near Fleet House, where twenty years previously George Fleet fell to his death in front of a lot of witnesses. Apparently it was either an accident or a “supernatural murder”. Which means it was actually a rather contrived killing that doesn’t hold up to much scrutiny, if other “man falls off roof” impossible crimes are anything to go by. (Not just a snipe at Sherlock, although that was disappointing; is there a single mystery where someone falls off a roof in impossible fashion and the solution is satisfying? It’s like murders in a lift.)

Stannard leaves, and Martin whines to Ruth about a woman called Jenny who he fell in love with during the war but managed to misplace at Edinburgh station. Whoops. He’s been searching for her ever since, despite having known her for about ten minutes. So I’m guessing Martin is our lovelorn hero who we’re going to have to be sympathetic towards even as he behaves like a jealous, snivelling man-baby. (Carr was a good mystery plotter, but he has some very strange ideas about the virtues of a certain kind of lunkheaded masculinity. All the heroes in his H.M. books are total bell-ends, with the possible exceptions of Ken Blake and the doctor in She Died a Lady.)

That’s a lot of snark, but the beginnings of these later H.M.s are always a slog. There’s normally four or five chapters of traipsing about and “comedy” before the mystery kicks into gear, after which things either quickly improve or go completely to pot. The lost sweetheart fills me with a certain sinking feeling, but the prison execution shed sounds promising. That will probably be the setting for the second murder (the first is obviously Fleet falling off his roof), and Carr was always very good at writing that kind of claustrophobic horror. Shame there’ll be 100 pages of fluff before we get there.

Chapter 2: “And it is now time, in this chronicle, to introduce none other than Sophia, Dowager Countess of Brayle.”

Martin goes to an auction of old weapons and who should happen to be there but Jenny, his long lost sweetheart? Who’d’ve thunk it?

She’s engaged, but that’s no obstacle; Martin vows to her that he’ll break up the marriage no matter what. Jenny is fine with this.

This kind of thing happens all the time with Carr, and we’re always supposed to side with the interloper. I’ve never read any of the biographies of Carr, but I do know he was married himself. Did he treat his wife with the same disregard he gives his female characters, or was he a perfect gentlemen and used his fiction as an outlet for his frustrations? At least Carr is happy to sacrifice a happy ending for a surprise, so there’s at least the possibility that Martin or Jenny might be a big ol’ murderer. Here’s hoping.

Jenny’s grandmother is Lady Brayle, the Dowager Countess from the quote above. And Jenny’s fiancé is Richard Fleet, son of the man who fell from the roof twenty years ago. So things are starting to come together already. Is all this just coincidence to get the mystery going? If this was Christianna Brand these would all be clues, and someone would be manipulating all of these chance encounters behind the scenes. But Carr is happy to rely on “the infernal cussedness of things”, which is supposed to be a plausible invocation of Murphy’s Law but more often seems like an excuse to lob as many coincidences together as he feels like.

H.M. is also at the auction. Lady Brayle accidentally hits him in the face with a shield, which she finds hilarious. (Haw, haw, HAW.)

In revenge, H.M. plans to stab the Dowager Countess up the bum with a halberd. I expect that sentence alone is enough to tell you whether you’re going to be able to stand John Dickson Carr or not.

Martin talks him out of it, but in her overexcitement at winning one of the lots, the Dowager Countess leaps back right onto the point. She finds this less hilarious, and the auction room falls silent. But to Martin’s delight everyone is clearly trying not to laugh. Because stabbing snooty ladies in the fundament is obviously the best thing in the world.

I imagine Carr was wetting himself when he wrote this.

Look, I’m not made of stone. I don’t lay claim to having a particularly sophisticated sense of humour. “Dowager Countess” is amusing by itself. I’ve been known to laugh at a good prat-fall or even a custard pie to the face. There’s a place for that kind of thing. But it’s not in a book. Some things just don’t cross from one medium to another. Trying to write physical comedy is like trying to yodel a painting: it’s going to take an extraordinary talent to produce something worth experiencing. Pynchon can manage it. But the kindest thing I can say is that Carr’s no Pynchon.

Anyway, the Dowager Countess and H.M. get into a childish bidding war. H.M. wins without knowing what he was bidding on, and it turns out to be the skeleton in the clock from the title.

I hope that this is Carr getting the obligatory slapstick out of the way so he can focus on the real mystery. For all my unkindness, I get the impression that he occasionally felt shackled to some of the “features” of his series and wrote things he didn’t really want to. Especially the impossible crimes. Many of the later mysteries would have been much better without these, and Carr’s heart doesn’t seem to be in them.

I also hope that this has all been hiding some clues. Humour is a great place to hide clues, because it’s hard to engage those two different modes of thought at the same time. But what could be the deeper significance of all this prannying about? Something to do with swords and rapiers? The fact the Dowager Countess was bidding on the clock?

Oh, and on page 35: “A skeleton in a clock, hey? That’s a bit rummy. Do you happen to know any more about it, my wench?” So my 50 page estimate on the w-bomb was too conservative!

Chapter 4: “Through a round glass dial, with gilt numerals and hands, the skull-face looked out.”

Martin travels down to Fleet House, but out of a muddle-headed sense of propriety he stays at the Dragon’s Rest pub over the road. He rings up Jenny’s fiancé Ricky, declaring himself to be “the enemy”. Ricky heads over to the pub to have a man-to-man with Martin, who declares his love for Jenny. Martin is ready for a fight, but Ricky is delighted! He wants the marriage over as well.

Chapter 5: “The embarrassment remained, but the tension had gone.”

So that’s that. Ricky likes Jenny, has known her since childhood, but there’s someone else he’d rather marry. Martin is pleased, but Jenny starts behaving weirdly. (A clue? Or Carr’s tendency to write emotionally unstable characters?) She’s ostensibly upset about the visit to the prison to look for ghosts. Ruth and Stannard (from Chapter 1) turn up, and Martin asks Ricky whether he’d like to take his place. Ricky is delighted! Again. Ricky is so delighted by everything that he surely must be the murderer…

Ricky also talks about the day his father fell from the roof. Here Carr pulls one of his most annoying tricks. Just as Ricky gets to the crucial part of his story, he suddenly – wait, what’s that? Could it be the sound of a writer artificially creating suspense by interrupting his own sentences? It is!

Carr always does this, and it’s enough to make you want to give him the Dowager Countess treatment. It’s never a good reason to withhold the information, either. When Salome Otterbourne gets shot in Agatha Christie’s Death on the Nile, just as she’s about to reveal the name of the murderer, it’s one of the most ridiculous and implausible scenes Agatha Christie ever wrote. But at least getting shot in the bonce is a good reason to stop telling a story! Here, Ricky is about to explain what he saw when he looked up at the roof, when… the village doctor appears. Not to tell the characters about an emergency. Not because there’s been a murder, or the Great Old Ones have broached our dimension and really want a beer and a slice of pork pie. Nope. He basically just felt like saying hello. And now we probably won’t hear what Ricky saw in the window for another hundred pages. It’s maddening.

Let’s break it there for now, before the red mist descends. There are 20 chapters, so four posts with 5 chapters each seems a good idea. Not much mystery to ponder over yet. I suspect the central problem, even if it’s not put centre stage, will be why there’s a skeleton in a clock in the first place. What could be the reason? I’m reminded of the great episode of Death in Paradise, where the murderer concealed the skeleton of his dead wife in his classroom as an anatomical display skeleton. Could something similar be the case here? But the point with Death in Paradise was that a skeleton is a plausible thing to have in a science classroom, so it’s a good place to hide one. Putting a skeleton in a clock draws attention to it.

13 thoughts on “Solve-Along: The Skeleton in the Clock (Part 1)”