I’d told myself I wasn’t going to play any more hidden object games, but when I got an email announcing the release of a game based on Gaston Leroux’s locked-room classic, The Mystery of the Yellow Room, I knew I’d have to at least try the demo. Luckily for my other work, the demo was so bad that I can’t justify playing the rest of the game, even for research purposes. You know something’s bad when even I can’t use it as procrastination fodder!

[No spoilers here, unless you really don’t want to know anything at all about The Mystery of the Yellow Room]

I suppose it’s only fair to point out that I think The Mystery of the Yellow Room is an incredibly over-rated mystery, although I seem to be in a minority here. (This widespread admiration crops up a lot in other mysteries, actually: Carr declares it to be the finest locked-room problem in the far superior The Three Coffins, and Christie has Poirot praise it in The Clocks). Personally, I don’t see what the fuss is about: I don’t think there’s a detective more annoying that Rouletabille; the solution to the mystery is simultaneously obvious and unbelievable; and (at least it the translation I read) the writing is beyond ponderous.

Anyway, all that should have worked in favour of the game. I’m much less likely to be annoyed by a loose adaptation of something I dislike than the mangling of a treasured classic. But even The Mystery of the Yellow room didn’t deserve this! 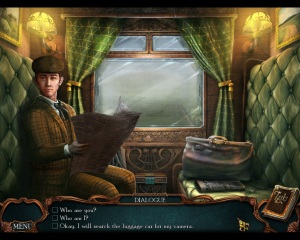 That’s a screenshot from the very beginning of the game. You play a photographer tasked with accompanying Rouletabille to the chateau containing the notorious ‘yellow room’ where Mlle Stangerson was attacked. That’s a reasonable enough conceit: these games need to assign you a character, and it wouldn’t really be possible to play as Rouletabille, because he’s the sort of detective who knows the solution long before the end but smugly keeps it a secret to drag things out.

But look at those dialogue choices! “Who are you?” “Who am I?” Yes, these are questions that a new player wants to know the answer to. But you’re supposed to leave the questions unasked and work the answers artfully into the conversation! We’re clearly starting in medias res here. This isn’t the first time our character has met Rouletabille, and it’s very likely that we’ve been making conversation for the entire time we’ve been on the train. What possible reason would there be for asking either of those questions? (Actually the game tries to give one: sleep induced amnesia! It’s almost insulting.)

Also, who ever wrote this seems to have fundamentally understood how dialogue trees are supposed to work. That third option (“Okay, I’ll search the luggage car for my camera”) is clearly a response that will lead on from Rouletabille’s answer to one of the other two questions. The game designers have presumably put it there to give the player a shortcut out of the conversation and into the action. But by presenting it as an option straight away it creates such a massive non sequitur that our character seems to be psychic.

Basically, whoever was in charge of the text for this has put no thought into it whatsoever. Which wouldn’t be a massive problem (although it’s too much for someone picky like me) except that it also seeps into the presentation of the actual plot. In case you’re not familiar with it, in the book Mlle Stangerson is assaulted inside a locked room from which no-one was seen to emerge. She isn’t dead, only unconscious. But the newspaper in the intro sequence to the game has “MURDER” in the headline. Characters talk about “a murder” and “the murderer”. But when you read a different newspaper (or use the game’s own journal function) it’s clear that no-one died. New players who are unfamiliar with Leroux’s book aren’t going to have a clue what’s going on.

The gameplay won’t help. These games are never going to be realistic, but within ten minutes of starting play I’d found a large knife hidden inside a railway station clock and smashed open a barrel to find a spark plug. The demo ended shortly afterwards, but I can’t imagine things improved (developers tend to frontload these games so their best stuff is in the demos).

I understand that it’s appealing to adapt classic literature, not least because it’s out of copyright. I think some developers might not be confident enough to create a historical story of their own, and think that by adapting an existing one a lot of the narrative work will already be done for them. This is a false economy. If you write your own story, you naturally come to know the ins and outs of it, just by virtue of being the creator. Adapting someone else’s story requires study. You have to read and re-read it until you know it inside out. I get the impression the creators of this read the book through once and then didn’t think about it much after that. Gaston Leroux may not be my favourite author, but no author deserves to have their story treated as shabbily as this.