Not a review, I’m afraid, but instead a plea for information.

I’ve been playing a lot of older mystery games recently to see if anyone has ever managed to get the format right. My research (it is research! It’s not procrastination if you take notes!) turned up a lot of games I’d played as a kid but forgotten about, a lot that I’d heard of but never played, and still more that passed me by entirely. A lot of them are still available, and there are some awesome sites where you can get them (legally!) for free, but unfortunately a lot of games seem to be lost, or unplayable on modern hardware, or only available on eBay for insane amounts of money.

That’s not necessarily a disaster. It’s hard to get too excited about many of the really old games. Look at this screenshot for 1985’s The Alpine Encounter:

What do you mean you’re not going to run off and play it? Don’t you want to know what happened to that missing vase?

But you can get all that from the Wikipedia page. There’s absolutely nothing to be gained by playing it. (Although I do remember a fun competition from a few years back where people rewrote it in different styles.)

But what mystery lover wouldn’t be intrigued by an adaptation of The Scoop, the 1930’s round-robin mystery written by six of the Detection Club’s most famous members (Agatha Christie, Dorothy Sayers, Anthony Berkeley, Freeman Wills Crofts, E.C. Bentley, Clemence Dane)!? 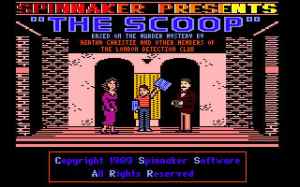 But it seems to be lost. No-one seems to be selling a copy, and there’s barely any information on the internet apart from a few database listings and the Wikipedia page. I found another screenshot, but it’s not really very informative:

It looks like the game was a point-and-clicker with a verb-system like Monkey Island. And possibly a time system like the Laura Bow games, because why else would you want “Wait” as a verb? And there’s also a “phone booth”, so maybe the setting got moved to the US (although the location bar says “The Phone Box” so maybe it’s just typical computer writing clumsiness)? I also predict a lot of frustrating puzzles trying to work out the difference between “Look”, “Observe” and “Search”.

But I need more! Has anyone played it? Does anyone know anything about it? Even if I couldn’t play it, I’d just be interested to know how it came about. Of all the mystery novels to adapt, whose first inclination is going to be The Scoop?!